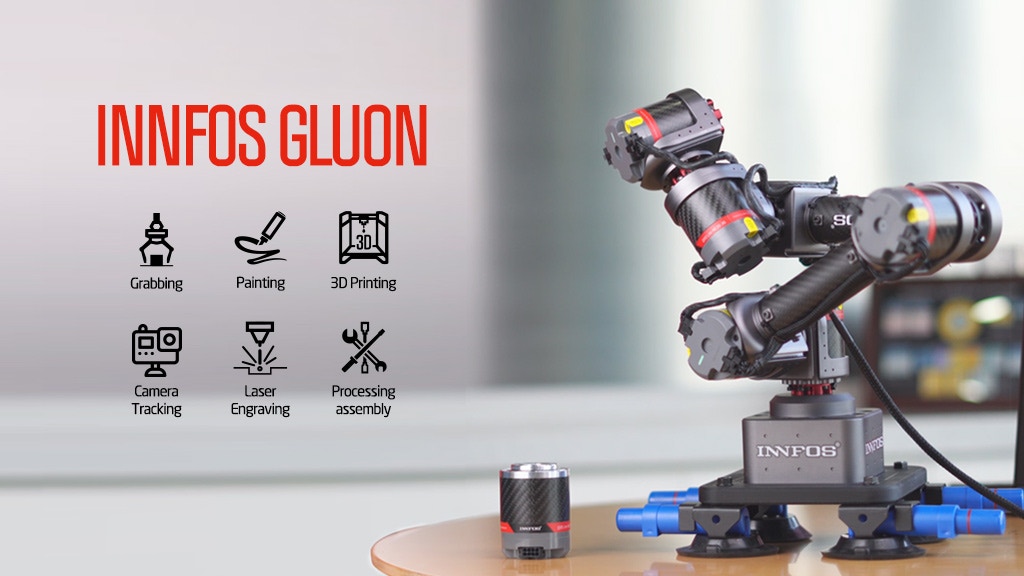 Industry experts INNFOS recently launched an advanced smart and compliant robotic arm that brings precision to the desktop and provides human-like flexibility for applications in prototyping, production, STEM and maker tasks. Their new product is available now on Kickstarter.

Desktop robot arms are growing in popularity due to the wide variety of applications they can be applied to, from education to assembly and automated tasks. Until now, these smaller desktop robots were limited by the performance of the stepper motors that drive them. Now, INNFOS Gluon has created an advanced desktop robot arm that is built around its industry-leading, self-developed SCA smart compliant actuator that provides the highest possible level of performance for precise control of position, velocity, and torque.

“Most desktop robotic arms are built for hobbyists and use a stepper or hobby servos motor that can only perform simple actions, thereby limiting their usability. Our goal was to bring the high performance of industrial-grade servo systems and compliant control to the desktop at an affordable price, allowing greater precision and the ability to perform more complex tasks. INNFOS Gluon is the most advanced robotic arm of its type and can perform virtually any task,” said David Yan, CEO, INNFOS.

As the world’s first desktop robotic arm with compliant control, INNFOS Gluon can handle multiple tasks with human-like flexibility and suppleness and includes safety features such as an advanced algorithm to stop the arm in the event of a collision with a person or object.

Here are some features make GLUON different from other robotic arms:

In addition to outstanding precision and load capacity, the arm features a wide range of different swappable end effectors, such as suction cup, universal ball gripper, micro servo gripper, electromagnet head and others. By simply changing the end effectors, the robot arm is capable of virtually any task, including pick and place, assembly, drawing and writing, and games.

INNFOS offers SDK, IAS and IRS for users. SDK offers APIs for various programming languages as well as logging tools for developers to control INNFOS SCA in different environments and the robot is compatible with MAC, Linux, Raspberry pi and Windows operating systems.

The INNFOS R&D team was founded in 2011 and is made up of a group of robotics experts that has been focusing on the development of intelligent compliant actuators for high-performance robots for many years. This latest release puts high performance on the desktop and makes robotics easy and affordable for anyone.

INNFOS Gluon is available now via Kickstarter campaign with special deals and discounts for early adopters.