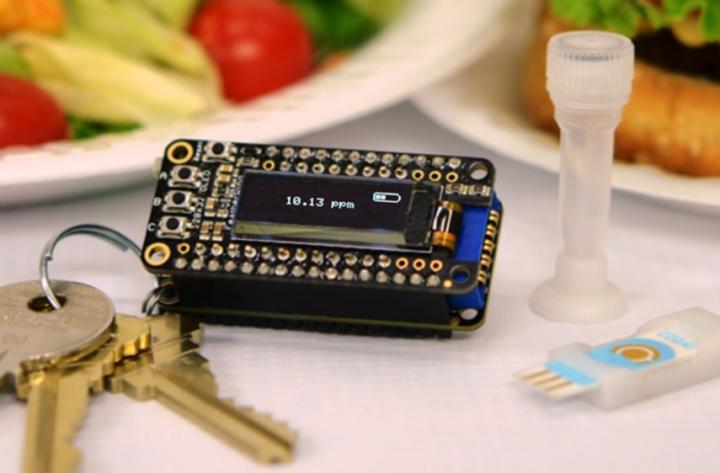 For kids and adults with food allergies, having meals from restaurants or hotels can sometimes be very risky. Even when ultimate care is taken, freshly prepared meals can accidentally become cross-contaminated with an offending food and trigger an allergic reaction. Every year many people end up in the emergency room due to food allergies. Researchers of the Harvard Medical School developed an affordable device called iEAT for detecting allergens, which can reduce the anxiety of the people prone to allergies.

Conventional methods to detect the hidden allergens require massive laboratory equipment. They are slow and also do not work on a low concentration of allergens. Ralph Weissleder, Hakho Lee, and their colleagues at the Harvard Medical School wanted to make a more practical, consumer-friendly alternative. They reported in the journal ACS Nano the development of a new portable allergen-detection system that features a keychain analyzer for detecting allergens in food anywhere, anytime.

The portable allergen-detection system called integrated exogenous antigen testing or iEAT is small enough to fit in your pocket and it costs $40 only. The iEAT consists of a handheld device to extract allergens from food and an electronic keychain reader for sensing allergens. Then, the result is wirelessly sent to a smartphone. The prototype is able to detect five allergens within 10 minutes, one each from wheat, peanuts, hazelnuts, milk, and egg whites, even if they are in very low concentration.

The main device uses a disposable sample collector which is inserted into the small-sized main unit. The device is so sensitive that the scientists were able to detect gluten in foods advertised as being “gluten-free”. For example, the device detected gluten in salad and an egg protein in beer. Although the prototype was primarily designed to sense five allergens only, the researchers say the device could be expanded to test for many additional compounds, including other allergens and non-food contaminants such as pesticides.