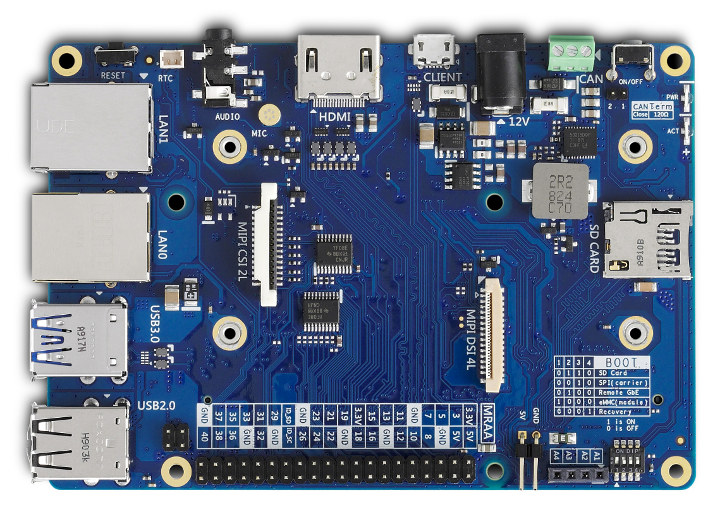 One of the major barriers to developing industrial applications is usually the complexity and cost of the development/prototyping platforms. A lot of SOMs, SOCs and board manufacturers, including ADLINK, have taken stabs at this problem with different solutions. Leveraging on the experience with their previous products, ADLINK recently announced the launch of a new product called the Industrial-Pi Smart Mobility Architecture Development Kit (I-Pi SMARC).

The Kit, according to the announcement, was designed to provide engineers/developers with an industrial-ready, low-cost prototyping platform which afforded the flexibility boards like that of the Arduino and Raspberry PI, but with features and hardening that allows it to be used-as-it-is, directly, in industrial solutions, unlike the aforementioned boards.

The I-Pi SMARC development kit contains an I-Pi carrier board, a LEC-PX30 SMARC module, a power supply, a USB programming cable, an SD memory card containing a Linux OS, and transparent acrylic shielding that offers protection but also ensures access to the device’s ports and IOs. The development kit is supported by the ADLINK change control process, thus it provides developers with the freedom to experiment with peripherals and sensors, and develop prototype versions of potential products with the assurance that there won’t be much to change when going from their prototype to final product.

To make sure developing software for the SMARC is easy, the kit is supported by a hardware abstraction layer (HAL), called MRAA, and a software repository, called Useful Packages and Modules (UPM), both of which are from Intel and help streamline the software development process. The HAL (MRAA)  allows the operating system kernel to interact with the hardware in a general way, instead of at a detailed hardware level, so few or no changes are needed when kernel-mode code is run on different hardware platforms. MRAA simplifies the logic for connecting to different sensor pins and supports platforms like the Arduino and RPi along with programming languages like C++, Python, JavaScript, and Java. The UPM provides access to software drivers and libraries for a wide variety of commonly-used sensors and actuators, which are also available for Arduino and RPi platforms.

An issue I-Pi SMARC also solves for developers is the product Lifecycle management where hardware components change without substitutions being communicated to end-users, leaving commercial products built on it to rot. According to ADLINK, any component or process change to the ADLINK SMARC module will be announced in line with the industry-standard engineering and process notice (ECN and PCN) practices, with a minimum of six months before the implementation.  ADLINK guarantees 10-year availability support with after-sales support and return merchandise authorization (RMA) along with reporting and debugging on production quality issues.

Price information around the Industrial-Pi (I-Pi) SMARC kit is still a bit sketchy but you can find more information about the kit on the Announcement Page and on the recently created but seemingly empty Wiki created for it.