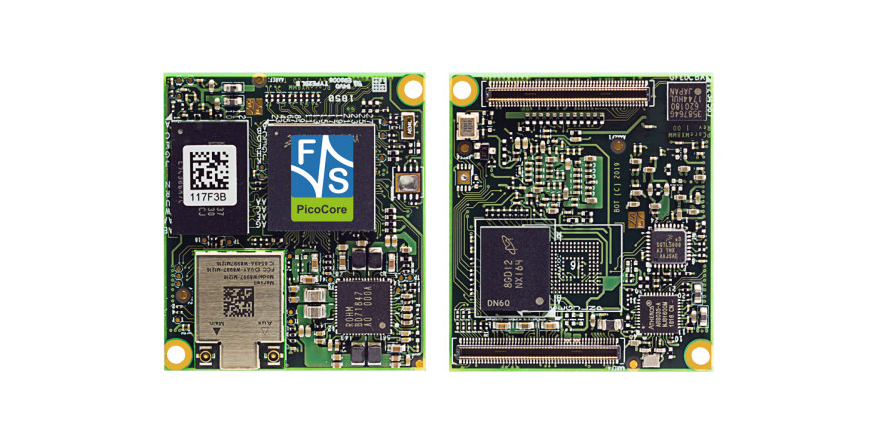 F&S Elektronik Systeme has unveiled its 40 x 35mm “PicoCore MX8MM” module which runs Linux on a quad-A53, 1.8GHz i.MX8 Mini with up to 8GB LPDDR4 and 32GB eMMC plus WiFi/BT, a GbE controller, PCIe, and optional -40 to 85°C support. The PicoCore MX8MM is a i.MX8M variant with lower video resolution, but a faster clock rate.

The PicoCore MX8MM has the same 40 x 35mm footprint as other F&S PicoCore models such as the i.MX7-based PicoCore MX7ULP. There are also i.MX6 and i.MX6 UL based PicoCore modules, which like the PicoCore MX8MM feature a Yocto Project-based Linux BSP. The stack includes Buildroot and UBoot. Windows 10 IoT Core will be available by the end of the year, and the i.MX8 Mini’s real-time, Cortex-M4 core supports FreeRTOS. The PicoCore MX8MM features USB 2.0 host and OTG ports and offers 4x UART, 4x I2C, 4x SPI, and 8x PWM. The power feature is listed as “+3.8V bis 5.5VDC,” and runs at 3 Watts. The module incorporates an RTC and is available in both 0 to 70°C and -40 to 85°C variants. Availability for the module extends to 2029. The module supports 1, 2, and 4-core Cortex-A53 configurations of the Mini.

The module offers up to 8GB LPDDR4 RAM, which is in contrast to the 1GB LPDDR3 present on the PicoCore MX7ULP. The module offers up to 512MB SLC NAND flash and up to 32GB eMMC flash, with a GbE controller on board along with 802.11ac and Bluetooth 5.0. The PicoCore MX8MM dual 100-pin connectors consist of a subsection of “Interfaces-FIX” pins that are similar to other PicoCore modules. This provides some backward compatibility. The PicoCore MX8MM enables LVDS or 4-lane MIPI-DSI with analog resistive and PCAP touch available via I2C. The analog and digital audio I/O comes in variety, like I2S and S/PDIF, as well as PCIe expansion and MIPI-CSI camera input. Pricing or availability are not provided for the PicoCore MX8MM, but more information should be further revealed soon.