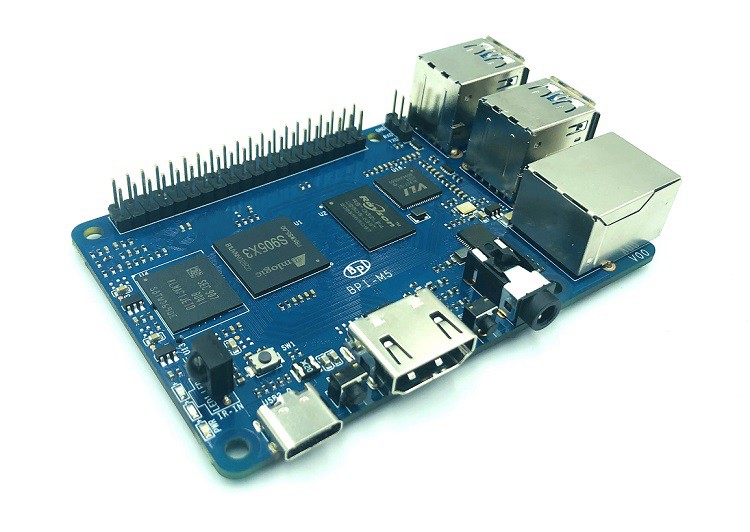 SinoVoip has listed specs for an upcoming Banana Pi BPI-M5 SBC with the same quad-core Cortex-A55 Amlogic S905X3 SoC. It is repeating many of the features from Hardkernel’s $50 Odroid-C4. This new SBC is the next-gen for the company’s most recent Banana Pi BPI-M4, based on a quad A53 Realtek RTD1395.

The 12nm fabricated Amlogic S905X3 is equipped with 4x, up to 2GHz Cortex-A55 cores, and a Mali-G31 GPU. As mentioned earlier, this board is similar to the Odroid-C4, is an open-spec, Raspberry Pi style board. It comes with 40-pin GPIO, 4GB LPDDR4, and support for Android and Linux. Other common features include 4x USB 3.0 host ports, a MicroSD slot, a GbE port, an HDMI 2.0 port with 4K@60Hz support.

Other misc I/O ports are listed as audio jack, IR, serial debug, and a USB Type-C port for 5V power. With the dimension of 92 x 60 mm we can conclude that this SBC is a bit larger than the Odroid-C4 or even Raspberry Pi. It is unfortunate to see that BPI-M5 lacks the support for the M.2 slot. PoE, and built-in WiFi/Bluetooth whereas the previous generation, BPI-M4 include them.

The company says it will provide Android and Linux images with source code. We’ll have to keep an eye on pricing once the board comes out. Further information can be obtained from the company’s wiki page.