Skip to content
HomeBlog Introduction to OPAMPs and Applications 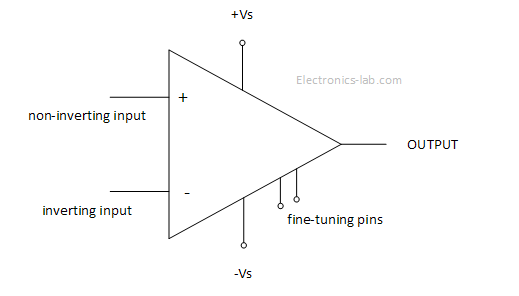 Introduction to OPAMPs and Applications

In this configuration a part of the output voltage is fed back to the inverting input and thus the gain of the OPAMP can be controlled and output isn’t saturating. The gain of such an amplifier is controlled by the two resistors Rf and Rin. The minus means that the output is inverted relative to input.

By adding more components on the feedback loop, different OPAMP circuits can be made, such voltage regulator circuits, current to voltage converters, oscillators, filters etc. 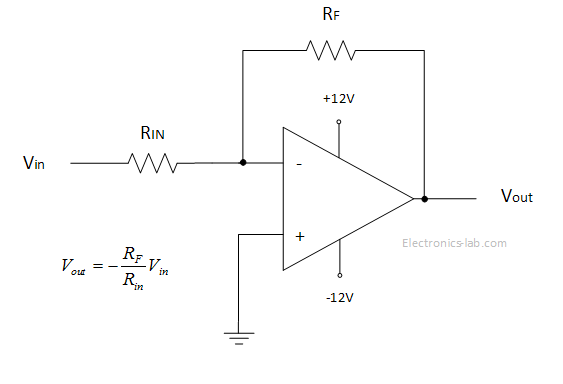 This expression is for the ideal OPAMP and can get more complex for the real OPAMPs. Some rules apply to better understand the ideal and real OPAMPs. 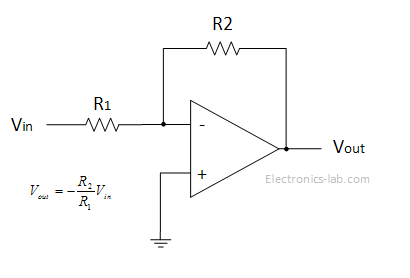 The negative sign tells that the output is inverted according to the input. 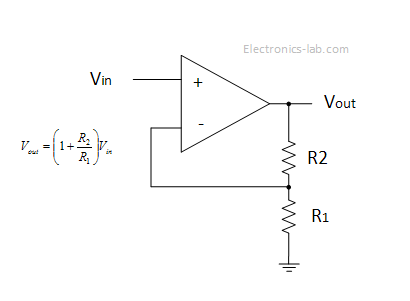 In this configuration the OPAMP works like a non-inverting amplifier. The output voltage will be as high to keep the difference in input voltages to zero. This drives us with a formula for the gain of this amplifier that is:

Note that the output voltage is in phase with the input voltage. 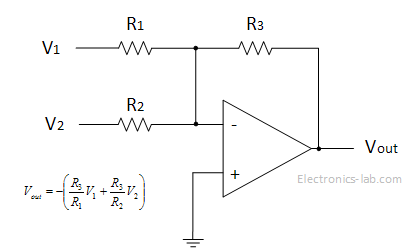 If all resistors are equal then the formula becomes: 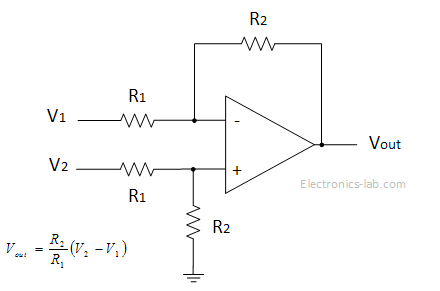 If the resistors are all the same this equation becomes:

In this configuration the OPAMP circuit is called an integrator, that means that the input signal is integrated at the output. The relation between the output and the input is as follows:

In real world applications a large resistor can be placed in parallel with the capacitor to provide stable biasing. Also a compensation resistor may be needed between the non-inverting input and the ground to correct voltage offset errors.

In this configuration the OPAMP works like a differentiator. The relation between the output and the input is:

To make this circuit more stable a capacitor may be added across the resistor and a resistor to be added in series with the capacitor, so that high frequency noise is reduced and eliminate the input bias offset voltage.

Positive feedback means that a part of the output signal is feed back to the non-inverting input. This will drive the opamp to the direction of saturation and thus output will be either to positive supply voltage or to negative one. Positive feedback can be used to make comparator circuits and by adjusting the feedback resistor we are able to adjust the hysteresis of the comparator. The term hysteresis means that the comparator has to voltage thresholds, one which the output changes to one direction and another threshold with the output changes to the other direction. This way the output is prevented from swinging from positive output voltage to negative voltage too fast and thus making it more immune to input voltage noise. Let’s see a comparator circuit.

The difference between the two threshold voltages is the hysteresis voltage.