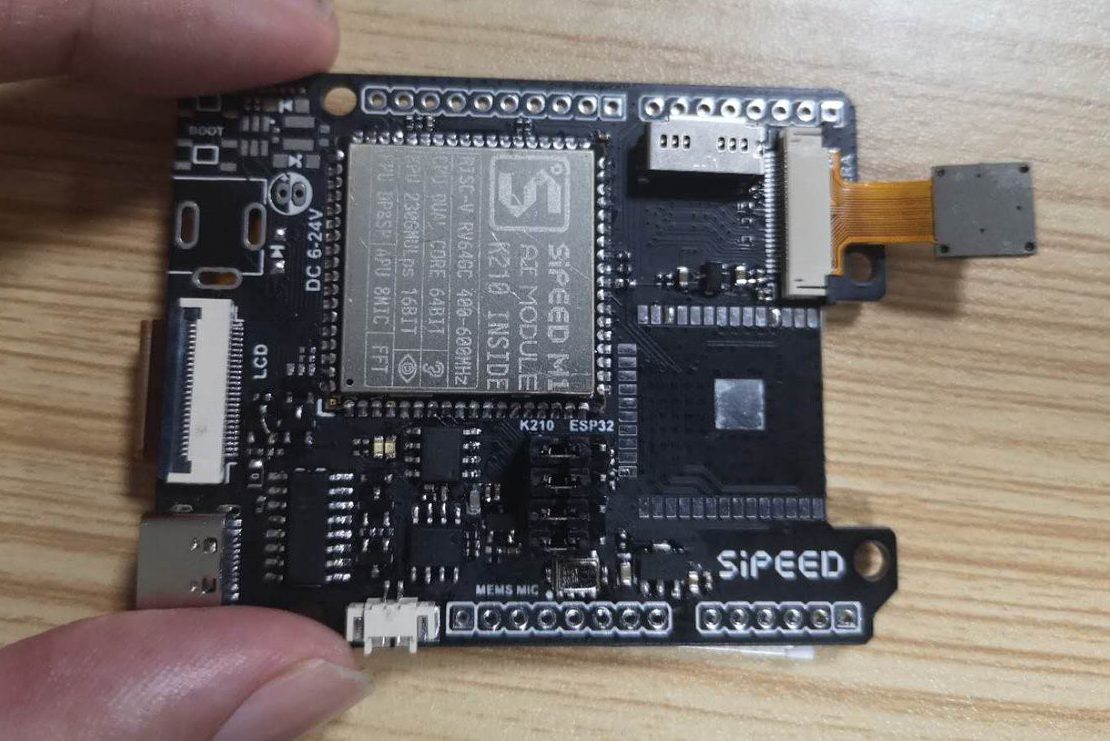 Sipeed released their 64-bit RISC-V MAix module at the end of last year, crowdfunding a series of boards on Indiegogo built majorly to do machine learning inferencing at the edge, with no cloud needed. There has been a lot of work put in, to document and support the MAix module, including both Arduino support and a port of MicroPython. Sipeed’s Maixduino is a MAix-based board that features a “classic” Arduino form factor which is pin-compatible to the Arduino. The board is designed based on two processor modules, Sipeed’s RISC-V MAix module, and an Espressif ESP-WROOM-32. Sipeed’s MAix module is based on the Kendryte K210 processor, that features two 64-bit RISC-V CPU cores, both with a built-in independent FPU, and 8Mb of SRAM.

The K210 has an onboard neural network processor (KPU) for supporting machine vision applications at up to 60fps for QVGA, and 30fps for VGA. Also available is an audio processor (APU) which supports up to eight microphones at up to 192KHz, with Fast Fourier Transform (FFT) hardware acceleration. It also includes a 16MB Flash and Wi-Fi support via an on-module Espressif ESP8285. When you flip the Maixduino over, it shows a basic wiring diagram of how the board’s two processor modules communicate with one another— that is an interesting addition. The ESP32 pins are broken out to include ADC support which the K210 lacks. 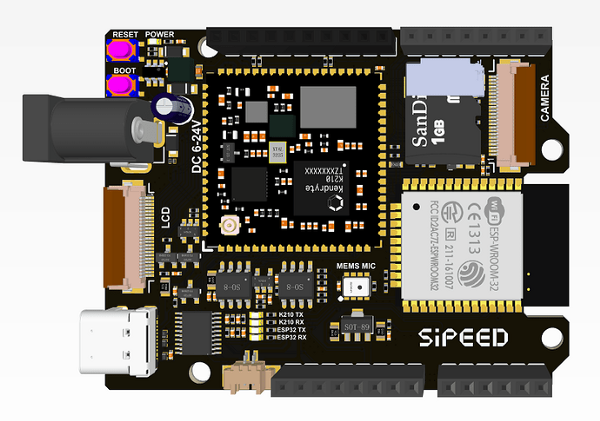 This suggests that it’s also available for other tasks, as it’s there as a co-processor. The board is powered through a USB-C socket instead of the conventional micro USB. For the silkscreen feature, there is likely provision for a barrel jack which can take 6 to 24V DC as input, although it’s unknown if this is going to be populated on the final board. The board possesses a single channel speaker PA onboard, enabling you to connect a 1 to 3W speaker, with a single I2S microphone offering keyword recognition support. A micro SD card slot and both an LCD display and camera connectors are available.

Development for the board can be done either in MicroPython, or in the Arduino development scene. The Arduino port enables full support for the neural network API, and inclusive of an object detection demo inferencing example using MobileNet v1. Support for the OpenMV development environment will be available soon. Full details about the Maixduino haven’t been announced officially yet, but it will be released later this week. Also, there isn’t a precise price point, but the MAix module itself retails in small numbers for around $5, So the Maixduino might cost somewhere between $20 and $30.