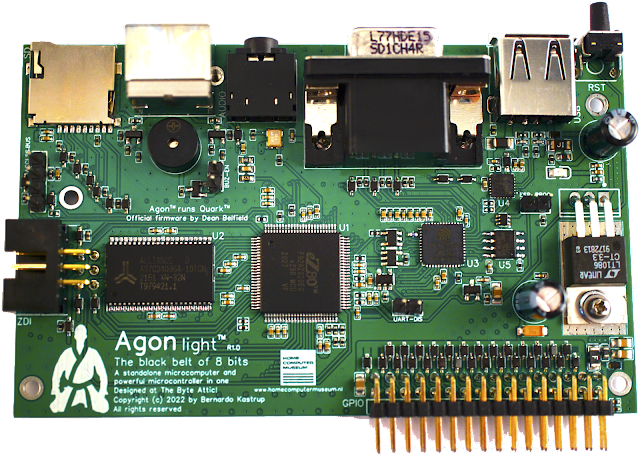 Meet Agon Light — A Microcontroller and a Microcomputer in One

Agon Light is a compact low-cost board that is both a microcomputer and an instant-on, BASIC-programmed microcontroller. The fully open-hardware open-source board sits between being a microcontroller development board like an Arduino and a conventional single-board computer like a Raspberry Pi. It happens to be a very fast, cheap, and the most hackable 8-bit microcomputer ever.

Built with state-of-the-art 21st-century technology, the board design aims at the best trade-off across performance, cost and flexibility. Agon Light comes with an 8-bit eZ80F92 3-stage pipelined CPU running at a blazing clock speed of 18.432MHz and featuring a 24-bit address bus that can directly address up to 16MB of memory and I/O. The board also has an audio-video coprocessor in the form of Espressif ESP32-PICO-D4 system-on-a-chip which runs at 240 MHz, 512KB of SRAM system memory, and 8MB of SRAM audio/video memory.

Other features which make the board fit as both a microcomputer and a microcontroller include a microSD card, VGA video output, and GPIOs.

“As a microcomputer,” the Byte Attic blog explains, “Agon is a standalone device that requires no host PC: it puts out its own video (VGA), audio (2 identical mono channels), accepts a PS/2 keyboard and has its own mass-storage in the form of a µSD card. As a microcontroller, it has a control port featuring SPI, I2C, twenty or more distinct GPIO lines (including lines for serial communication), a system clock output, as well as power (3.3V and 5V) and ground rails.”

You can do all your programming right on it without needing a separate computer; writing and debugging your code in BASIC. 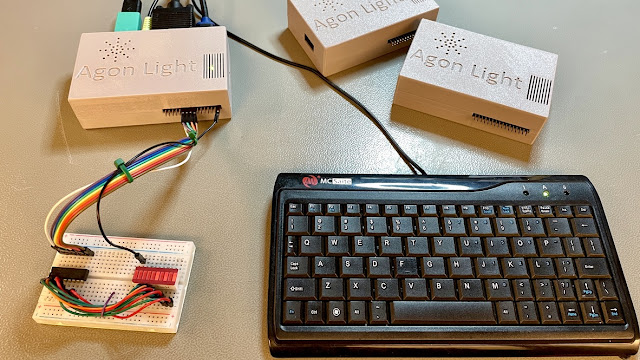 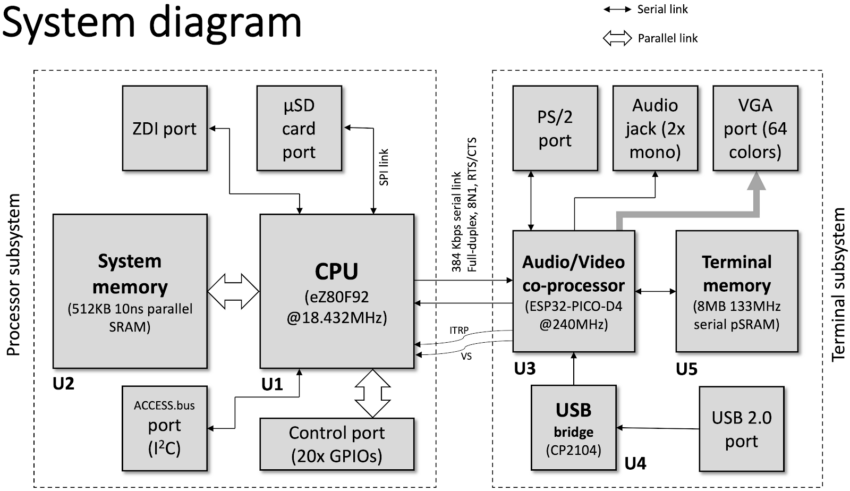 Agon Light sets the pace with a large margin compared to the performance of other machines. It scores best in all popular microcontroller benchmarks including the Rugg/Feldman benchmark, Noel’s Retro Lab’s BASIC benchmark, and Matt Heffernan’s “Battle Royale” benchmark.

The board is also built for maximum flexibility. Its entire firmware suite can be programmed in Standard C with freely-available tools such as Arduino IDE and Zilog’s ZDS-II IDE.

“Instead of having to program kernel code in assembly to write to EPROM, you can simply write C code, compile it with free tools and upload your firmware into the eZ80’s and the ESP32’s embedded flash memories. You have full control not only of the basic functionality of Agon Light, but also of the look-and-feel the user experiences upon turning the machine on. You can brand it yourself and show your dream computer to your friends,”

The board can be used for a variety of things since it’s an 8-bit microcomputer that boots instantly into a BASIC programming interpreter. It is a bit like a vintage ZX Spectrum or Commodore 64 and can equally do almost everything you use those computers for.

Well, from the look of things, Agon Light might eventually have a “heavy” version as the maker of the board also plans to make a high-performance model with the newly released eZ80F91 processor system running at 48MHz and with 256KB of embedded flash, 16KB on-chip high-speed SRAM. The future model will also have 2MB of onboard SRAM, a mouse port, RTC, a speaker, and more GPIOs than the “Light” version.

Those from the UK can visit here to see these various options with their prices while buyers from Australia, NZ, and Oceania can go here to place orders.

Other useful details on the Agon Light can be found on the official product page.