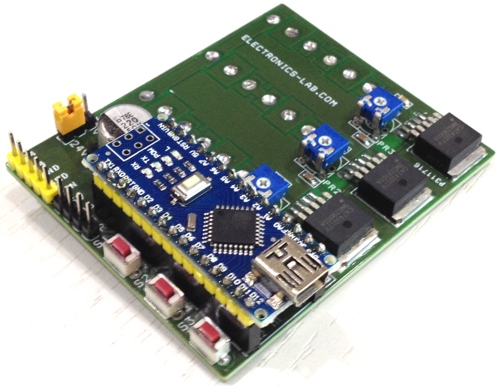 This is my second project for LED Driver based on CAT4101 IC. The first project was for single White LED. This project has been designed to drive 3 channels of RGB LEDs with PWM signal which helps to create multi-color LED light. Arduino Nano is used to generate PWM signals for RGB LEDs and board has 3 tactile switches and Analog signal input to develop various RGB LED related applications. Each channel can drive load up to 1A and input supply up to 12V DC. 1A X 3 Constant current LED driver shield for Arduino Nano has been designed for verity of LED related applications. The shield provides accurate LED current sink to regulate LED current in a string of LEDs. The LED current is mirrored and the current flowing from the RSET is set by PR1. On board 2W X 3 LED are used for testing purposes.