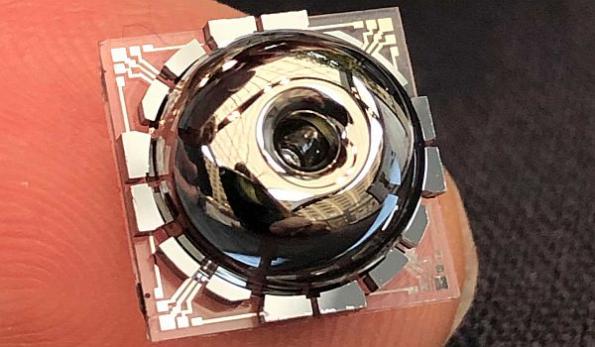 Researchers at the University of Michigan say they have developed a small, inexpensive, and highly accurate gyroscope that could help drones and autonomous cars stay on track without a GPS signal.

The ultra-high-precision MEMS gyroscope – called the birdbath resonator gyroscope – is almost perfectly symmetrical, and made of nearly-pure glass. This, say the researchers, enables it to vibrate for long periods, similar to the ringing of a wine glass.

Most smartphones contain gyroscopes to detect the orientation of the screen and help figure out which way they are facing, but their accuracy is poor and often incorrectly indicate which direction a user is facing during navigation. Autonomous vehicles on the other hand currently use high-performance gyroscopes inside their backup navigation systems in the event of the loss of a GPS signal. But these devices are larger and much more expensive.

A device that enables navigation without a consistent orienting signal – called an inertial measurement unit (IMU) – is made up of three accelerometers and three gyroscopes, one for each axis in space. However, say the researchers, getting a good read on which way you’re going with existing IMUs is so pricey that it has been out of range, even for equipment as expensive as autonomous vehicles. To address this problem, say the researchers, a low-cost IMU with much higher accuracy is strongly desired.