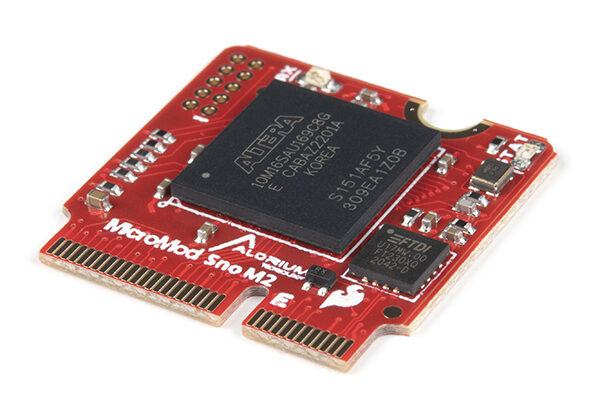 SparkFun has announced the public availability of another MicroMod form factor processor board with an onboard Alorium Sno System on Module (SoM)–  MicroMod Alorium Sno M2 Processor board. Hosting an 8-bit AVR instruction set, Sno’s FPGA offers a reconfigurable hardware platform. Its compatibility with the ATmega328, allows Sno to work with the Arduino IDE as well. The Sno SoM’s compact footprint makes it perfect for space-constrained applications and proves to be a natural fit for prototyping in the MicroMod’s form factor.

Based on the Intel Max 10 FPGA, Alorium Technology offers a library of custom logic called Xcelerator Blocks (XBs) through the Arduino IDE which expedites the functions that are slow for an 8-bit microcontroller. Servo control, quadrature, floating-point math, NeoPixel, and enhanced analog-to-digital converter are among the XBs as part of the library. Alorium further provides a roadmap wherein the future XBs will be incorporated depending on input from early adopters and new potential customers.

We are excited to announce the newest board to the MicroMod family: Meet the MicroMod Alorium Sno M2 Processor! This Arduino-programmable FPGA is perfect for those of you who have been interested in either FPGAs, MicroMod, or both an easy way into each field! 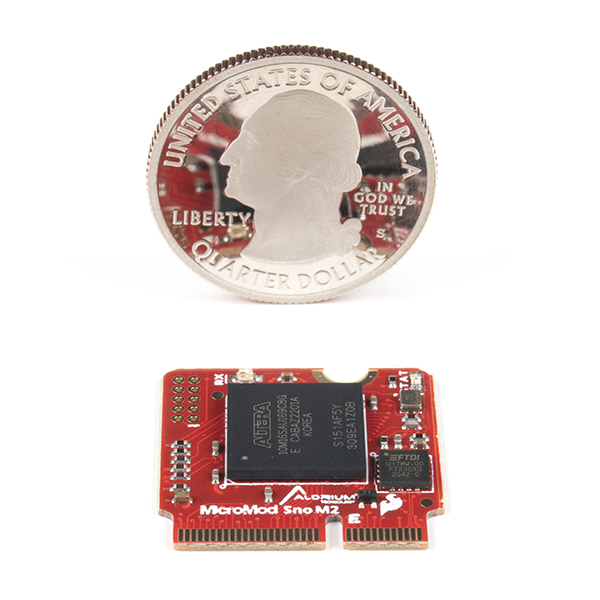 The board comes with flash storage of 32kB and memory of 2kB SRAM. With an operating voltage of 3.3V, the processor board attributes to a clock speed of 16/32 MHz. The board has 32 dedicated digital I/O pins out of which six can be used as analog pins having 3.3V input and 3.3V output. Having a 12-bit sustained resolution and a sampling rate of 254k samples/second, the board provides an ADC performance of 1MHz. Additionally, the MicroMod Alorium Sno M2 Processor board can be integrated with SparkFun MicroMod carrier boards using the M.2 keyed interface.

The hardware also features a JTAG footprint on the board allowing experienced users to communicate directly with the FPGA using a JTAG programmer. Furthermore, the microcontroller’s design is such that it can easily be extended. Alorium Technology, in addition, has created a support model for people who want to manufacture their own XBs and connect to the on-chip microprocessor.

Priced at $49.95, the MicroMod Alorium Sno M2 Processor board can be purchased from SparkFun’s website.