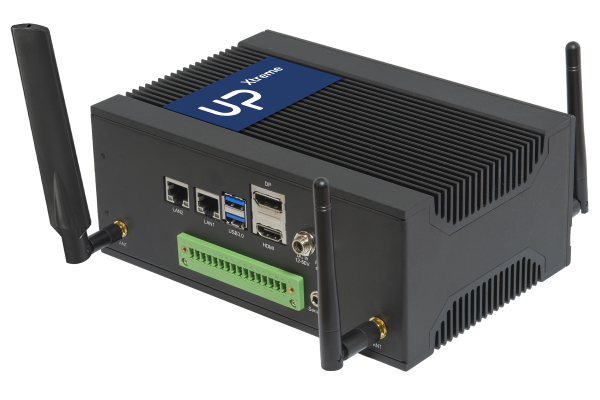 AAEON’s UP project has launched an edge computing enabled kit called the UPX Edge. The system which was developed to power industrial automation, robotics, AI, and IoT applications, is built around the Intel 8th Gen Whiskey Lake-U based UP Xtreme board and comes preloaded with an Ubuntu 18.04 image based on Linux kernel 5.0

It was initially available on Kickstarter as the “UP Xtreme Pro” or “UP Xtreme AI Pro” (if u selected the option of a UP AI Core XM2280 M.2 module) with a price tag of $150 is now available at $499 with various processor options, including the UP AI Core module which will set you back a further $139 on the Core i7-8665UE and i5-8365UE SKUs. Asides the price difference, compared to the prototype advertised on Kickstarter, the new UPX Edge system also comes with all the UP Xtreme’s real-world coastline ports exposed and offers a wider -20 to 70°C operating temperature range compared to the originally listed -20 to 60°C, which is maintained even when the AI Core Module is added to it.

Unlike the UPX SBC, the UPX Edge chassis version brings forth the UP Xtreme’s RS232/422/485 headers as 2x DB9 COM ports, and there’s also a jack-style RS232 serial port and a USB port which the SBC product page listed as a USB 3.0 ports but the UPX Edge refers to them as a USB 3.2 Gen 1 port. This must, however, be a typo since there is no specific reference to the USB ports being upgraded.

Asides the various ports mentioned above, the UPX Edge also extends the 40-pin and STM32-related GPIO as Phoenix connectors on either side of the system with an audio jack, a 4x antenna connectors, and optional VESA and DIN-rail mounting also provided.

The system has a consumption average of 26W and is designed to be powered by a 12-60V DC power supply with a lockable connector and power button.