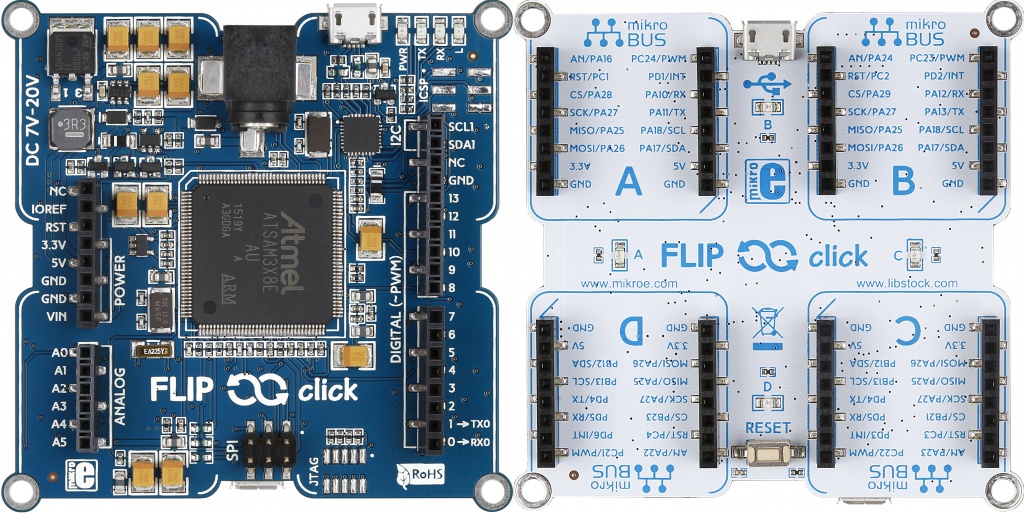 MikroElektronika, the microcontroller development boards and accessory boards manufacturer, introduced a new development board for beginners and non-experts called Flip & Click.
Flip & Click is a rapid prototyping tool that is an Arduino Due on one side, and four mikroBUS™ sockets on the other side.

The first side, the blue side, is Arduino Due side, it based on the Atmel ATSAM3x8E ARM® Cortex®-M3 processor which runs at 84 MHz and features 512KB of flash memory and 100KB of SRAM. This side is compatible with Arduino Leonardo shields thanks to its connectors, which makes it easy to expand its functionality and to add more features.

The mikroBus is a proprietary add-on board interface specification by MikroElektronika (mikroE). It consists of two 8-pin rows that expose I2C, SPI, and serial ports, 5V and 3V3 power supply, an analogue input, a PWM output, and reset & interrupt signals. All these pins, except the power supply ones, can be used as GPIO too. MikroE has developed several hundreds of extension boards for it, many of them have sensors, and there are also GPS, phone and other wireless boards, motor & LED drivers, etc.

Flip & Click can be programed with both Arduino IDE and Python. For Arduino IDE programmers, you need only to plug it in with USB cable, run the IDE and start writing your sketches – it will be recognized as Arduino Due.

For Python lovers, they can use Zerynth Studio and select MikroElektronika Flip & Click from ‘available boards’ after connecting it, then you can start writing your programs.

Flip & Click is available for $39 on its official page where you can also get access to full documentation, resources, and sample projects. Many users have published their reviews about this board and you can find them here and here.