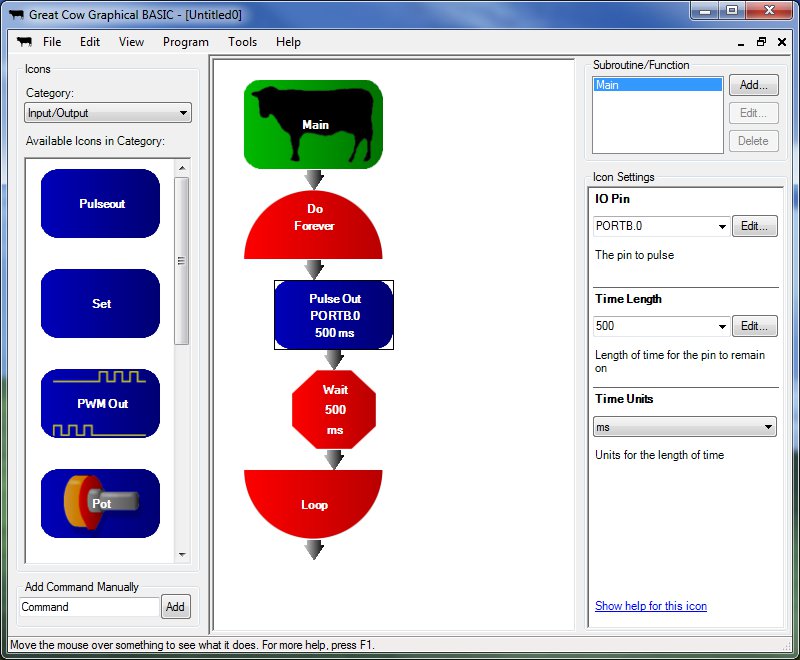 Great Cow BASIC is a robust and fully functional compiler and assembler for 8-bit microchip PIC and Atmel AVR microcontrollers. It was developed to cater for all class of embedded system solution developers from experts to beginners but with a great tool to help beginners.

It was developed to achieve three major goals which include;

The third one which seems to be a viable solution to one of the pain points of developers is one of Great Cow BASIC’s most useful characteristic. The design intent was to remove the complexity of using and programming a microcontroller and by proxy, make Great Cow BASIC suitable for beginners, for those who do not like or wish to learn assembly language and for experienced microcontroller programmers all at the same time.

For more experienced microcontroller programmers, the Great Cow BASIC IDE is the way to go. The IDE, which is primarily based on Synwrite created by Alexey Torgashin but adapted, modified and maintained for GCB by Frank Steinberg, integrates several amazing features that make firmware development easy and less stressful.  It incorporates a simple to change programmer, the editor with syntax highlighting and code folding, sub/function list, autocomplete, context-sensitive help, multiple tabs, and bookmarks and a host of other attractive and engaging features.

A highlight of some of the features of the GCB includes:

Great Cow basic has been used in the development of tons of projects like game controllers and projects featuring different sensors for tasks like temperature monitoring, distance measurement with ultrasonic sensor, display of text and images on LCDs and so on. A good number of these past projects have been collated into an example folder that can be found here and it serves as a good resource for coding newbies as it contains different code blocks that may be needed in the when building a project and they are written in such a way that they can be reused in other projects.

To mention a few, some of the programmers and tools supported by Great Cow Basic include;

The Great Cow BASIC toolchain is available for Windows, MacOS, and Linux users. Currently, the Great Cow Graphical BASIC will only run on Windows and requires the .NET Framework 1.1 or higher.

I’ve seen a ton of such great BASIC/Pascal/whatever graphical programming IDEs appear and vanish quietly of the years, and guess what? I’m still sitting here with my C compiler.

But I wanted to give it a try, as I’m currently developing a measurement tool for the lab, that uses an ATMega16Ma chip.

While the chip itself is supported by GCBasic, it isn’t by the flashing tool they’re using (avrdude), so I can’t write to the chip.
Also, I’m using the CAN controller of the atmega, and that isn’t supported, so I’d have to write to the special function registers manually, while there are several ready-made and tested libraries available for C.

This may be one far-fetched example, but in my experience, a tool like this is cool, as long as it supports everything you need, but if not, you’ll spend an insane amount of time doing it yourself, and trying to understand the tools internals.

I really appreciate that people are doing such projects, but if you want to help people get into programming, stay away from BASIC. It’s a one-way road that leads to nowhere. Write a tool that spits out well documented C code, use the standard libraries and the GCC compiler, and don’t try to reinvent the wheel.

When I set the oscillator type, I cannot read the right part of the elements because the drop down box is too small… is there a solution?