Carbon monoxide (CO) has been called the “silent and invisible killer” because it doesn’t has smell, color, or taste. It’s one of the most prevalent causes of death due to poisoning. Smoke and CO detector are readily available and quite common, Nest Protect, one of the most popular household detectors can detect smoke and carbon monoxide in the home. RK Clean Air is offering more than just smoke and carbon monoxide protection by adding extra security of monitoring gas leakage and fan control.

The capability of combined smoke, carbon monoxide, natural gas, and propane detectors seems intuitive but has not been encountered. A detector coupled to an exhaust system to extract and dissipate dangerous flammable gasses as well as carbon monoxide could prevent many deaths and provide a warning to building occupants. For example, the first notice that many people have of a propane or natural gas leak occurs when smelled in another area of a home only after explosive concentration of gas are reached in other isolated home areas. RK Clean air is able to combine all these together to create a powerful detector.

Furnished with powerful sensors, RK Clean Air continually monitors gas, smoke and CO levels in your home, giving its users a peace of mind. Just like Nest and most detectors, RK Clean Air is able to send a notification to a smartphone. When the RK Clean Air detects danger, it alerts you on your smartphone, while simultaneously flashing its light, sounding an alarm and turning on RK Extractor system that is used in clearing out any harmful gas. 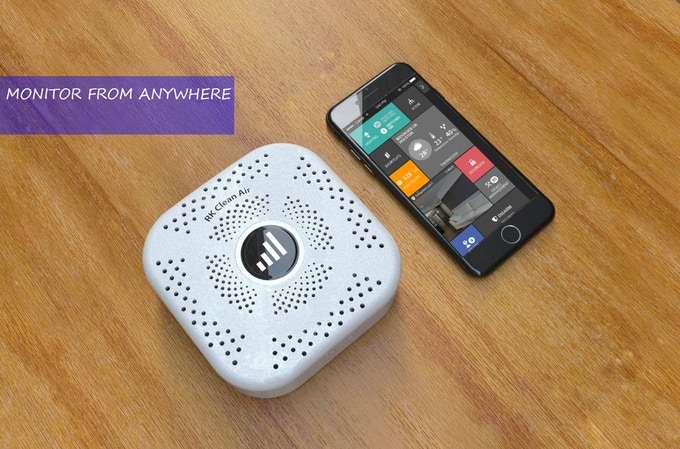 RK Clean Air is also equipped with a clock that will always display the time in idle mode. The clock can be set using the Apaxon Home Automation App that is developed for the RK Clean Air detector.

The following are some of the significant features of RK Clean Air: