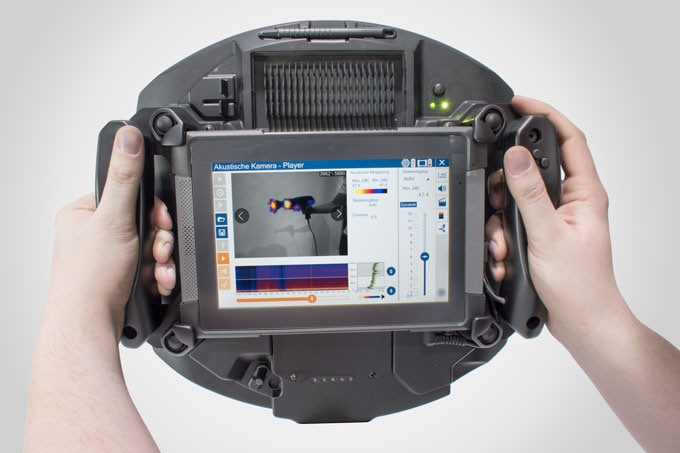 SOUNDCAM – The World First True Handheld Sound Camera for Everyone

Every day of our lives we get bombarded with different sounds around.  Loud music, radio, people talking on their phone, automobile, traffic, and those unknown late night quacking sounds. All of these sounds are what makes our day to day activities, and we have even gotten accustomed to most of them and rarely get disturbed by them. However, when an unwanted sound keeps popping into our life, altering our general state of mind and starts becoming a nuisance, we start looking for ways of finding the source of the sound in the hope of getting rid of it. The human ear does an excellent job of finding the source of sounds but can quickly get confused when their many sounds are popping around, or the sounds are slightly dense. Sound localization is a critical concept due to its numerous application and research has been poured into this. The team from CAE system are launching a first of its kind called SOUNDCAM that will allow one to visualize any sound source.

CAE Softwares and Systems, a Germany-based company, is launching SoundCam on Kickstarter. SOUNDCAM is the first camera that images sound and is affordable for everyone. The system is intuitive and as easy to use as a smartphone. SOUNDCAM locates sound sources in real time and immediately displays the results on the screen. SOUNDCAM visualizes complex acoustic information and creates a connection between hearing and seeing. Analyzing and understanding sound has never been easier! Not only does SoundCam does the job well, but it also comes cheap as compared to traditional acoustic cameras (could cost upwards of $100,000).

The application of SOUNDCAM is endless. I remember sometimes ago; I notice a disturbing noise was coming from my car’s engine side when putting on reverse mode but goes off when on drive or other modes. This was always annoying, and when I took it to my mechanic, he wasn’t sure where the sounds were coming from. After guessing around and dismantling a few parts, still couldn’t find the source of the sound and he suggested to open up the whole engine to see if it was from inside the engine, well, of course, I wasn’t ready to allow anyone open up my whole engine without being sure of what he or she is looking for. I left the car like that until one day it either suddenly disappear or I got used to it that I didn’t observe it again. A perfect application of SOUNDCAM will have been in this scenario, SOUNDCAM will have possibly identified the location of the sound in a non-invasive mode saving hours of lost productivity, money, and precious time. SOUNDCAM can also find applications in buildings for detecting sound leakage in supposed sound-proof structures, in electronics, drones, noise analysis, factories, automobile testing and evaluation, military applications, and thousands of possibilities.

SOUNDCAM consists of 64 microphones, an optical camera, an integrated data acquisition and analysis system, as well as a display and control unit with touchscreen and hardware buttons. The system displays high-resolution results in real time on it’s screen. The algorithm running on SOUNDCAM analyze the time delays it takes for a sound propagated to travel from its source to the microphone array and calculates the accurate acoustic pictures and videos in real time. The optical camera is used to generate the needed optical information, and optical and acoustic pictures are overlayed. These overlayed results are then displayed on the screen. 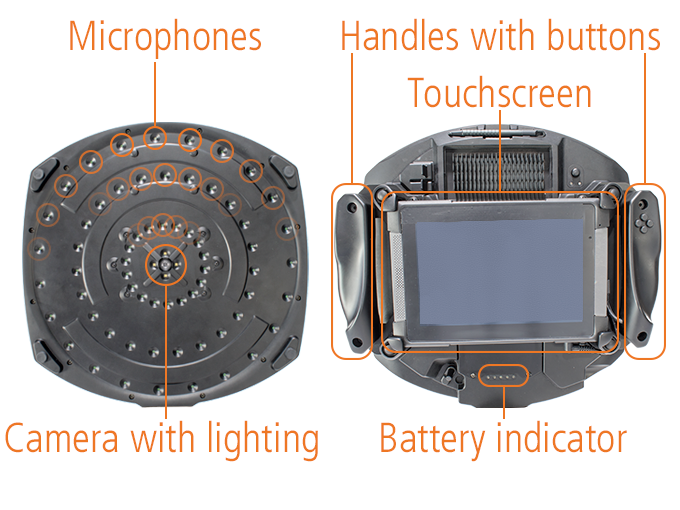 The SOUNDCAM device is battery powered and waterproof IP54 rated which means there is a possibility it can even be used underwater (of course at your own risk). It is powered by quad-core ARM A53 running at 1.2GHz speed with 1GB of RAM. The display is touchscreen removing the need for keyboard or mouse, but those can still be added through its onboard USB board which is as well used for exporting data from the device. It runs Linux out of the box with an optional Windows support available. It provides support for interfacing with a computer unit through its ethernet port.

SOUNDCAM is launched on Kickstarter with the SOUNDCAM early bird starting at a discounted 3,999 EURO, a 50% from the expected retail price. Shipping is expected to commence in late 2018 to early 2019. SOUNDCAM will revolutionize a lot of work and will save hours of lost productivity in troubleshooting sound localization problems which will inevitably save cost.