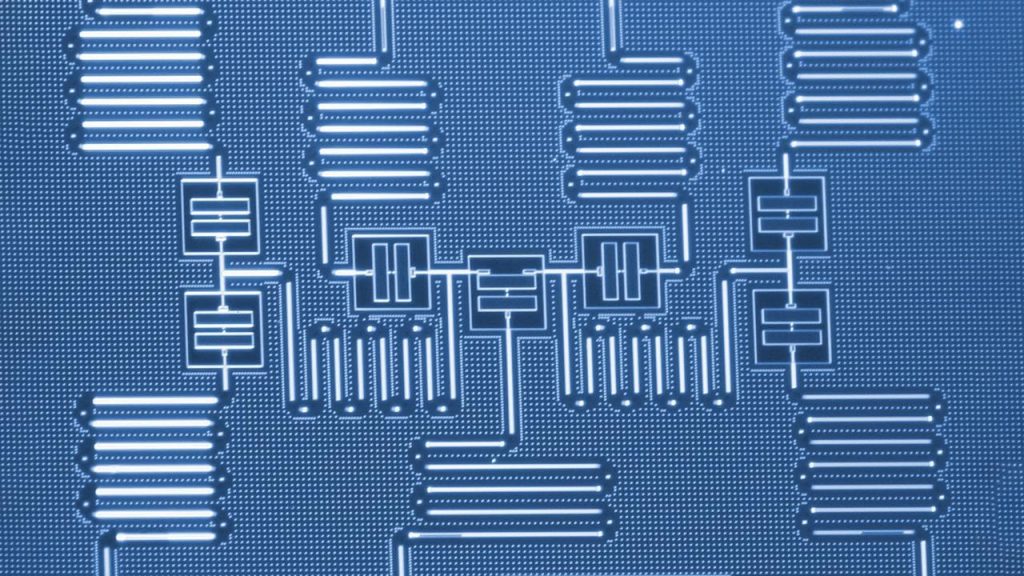 Scientists at the University of Stuttgart and the KIT succeed in important further development on the way to quantum computers.

Quantum computers one day should be able to solve certain computing problems much faster than a classical computer. One of the most promising approaches is based on the utilization of single photons to carry and process quantum information. Scientists of the University of Stuttgart and the Karlsruhe Institute of Technology (KIT) were now able to integrate three necessary main components (single-photon source, beamsplitters and single-photon detectors) on a single chip and operate it on the single-photon level. This experiment demonstrates the functionality of the basic components for a scalable system for photon-based quantum information processes.  The results got published in Nano Letters.

In contrast to the widespread silicon technology, the experiment was implemented on a gallium arsenide (GaAs) platform, allowing the direct integration of nanometer-sized structures, called quantum dots (QDs), which can serve as efficient on-demand sources of single photons. In addition, GaAs allows guiding these single photons to optical logic circuits and to special on-chip detectors made of superconducting nanowires. In the experiment, single photons emitted by an optically pumped quantum dot were guided inside a photonic waveguide and divided by an on-chip beamsplitter into two waveguide-arms, each equipped with a detector.

“One of the challenges so far in this type of fully on-chip experiment was the close proximity of the excitation laser to the on-chip detectors”, explains Mario Schwartz.

The PhD student from the Institute of Semiconductor Optics and Functional Interfaces (IHFG), University of Stuttgart, was working over the last years on the realization of a proof-of-principle experiment to show the feasibility of combining all main components on one single photonic chip. The project was realized in close collaboration with the PhD student Ekkehart Schmidt from the KIT, who is an expert for the design and implementation of the on-chip detectors.

The scientists were able to significantly reduce the influence of the laser photons by implementing reflecting metal layers on the chip. This idea allowed the verification of the quantum nature of the QD emission by using only the on-chip components. “The successful experiment is an important step forward and demonstrates the potential of fully integrated photonic circuits with all main components being implemented on a single chip.

We foresee clear possibilities of increasing the device complexity in the near future” says Prof. Dr. Peter Michler, director of the IHFG, University of Stuttgart.