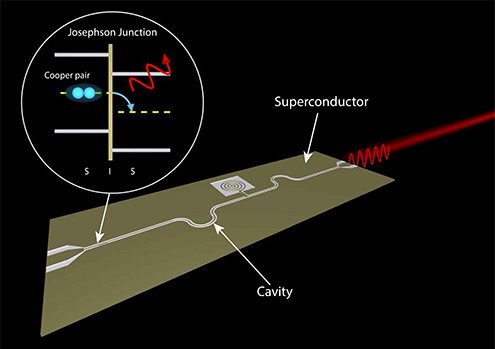 Lasers are everywhere these days: at the checkout in the supermarket, in the CD player in the lounge – and quantum researchers need them to test qubits in the (future) quantum computers. For most applications, today’s large, inefficient lasers are a perfectly adequate solution, but quantum systems operate on a very small scale and at extremely low temperatures. Researchers, for the past 40 years, have been trying to develop accurate and efficient microwave lasers that will not disturb the ultra-cold and fragile quantum experiments. A team of researchers from the Dutch Technical University Delft have now developed an on-chip laser, which is based on the Josephson-effect. The resulting microwave laser opens the door to applications where microwave radiation with a low loss is essential. An important example is the control of qubits in a scalable quantum computer.

Lasers emit coherent light: the line width (the color spectrum) can be very narrow. A typical laser comprises a large number of emitters (atoms, molecules or charge carriers in semiconductors) in a oscillator cavity. These conventional lasers are generally inefficient and generate much heat. This makes them a challenge to use in low-temperature applications, such as quantum technologies.

The researchers constructed a single Josephson junction in an extremely small superconducting oscillator cavity. Here, the Josephson junction behaves like a single atom, while the micro cavity behaves like a pair of mirrors for microwave light: the result is a microwave laser on a chip. By cooling the chip down to ultra-low temperatures (less than 1 kelvin) a coherent beam of microwave light is generated at the output of the oscillator cavity. The on-chip laser is extremely efficient: it requires less than one picowatt to produce laser radiation.

The research paper can be read here.