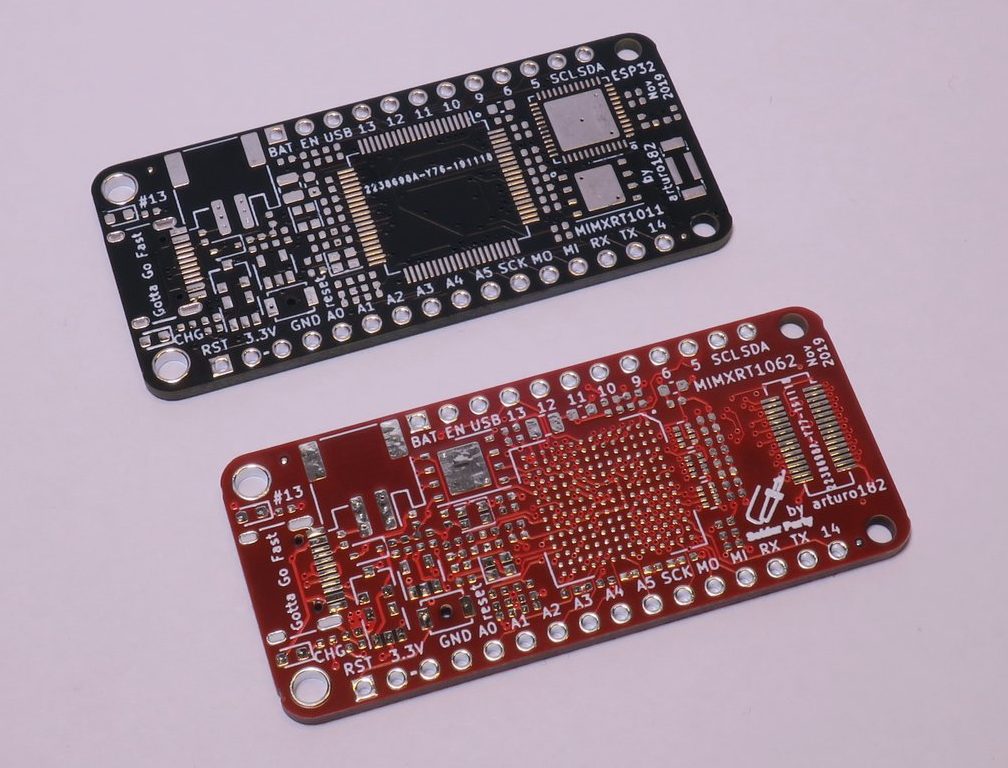 The i.MX RT Family Makes for Some Feature Filled Feathers!

Thanks to a host of useful feather wings and shields, the Adafruit Feather form factor is becoming a very popular one with a host of other boards now based on it, offering not only the shape and size but also pin compatibility to allow the use feather addons like the FeatherWings and shields. In line with this, Arturo (@Arturo182) recently announced via his twitter handle that he is working on two new Feather form-factor development boards which are based on NXP’s i.MX RT Family of microcontrollers.

The first board, which is based on the RT1062 MCU is loaded with almost the same functionalities you will find on the Teensy 4.0. It comes with the feather standard arrangement of I/O headers with an extra expansion header that breaks out a suite of pins to allow access to the awesome display interface available on the RT1062. The breakout pin’s to the display interface, which is capable of driving WXGA panels which have a resolution 1366 x 768 pixels and it is also available for use as extra GPIOs when using the board without a display.

The second board is, quite the kicker as it implements not just the RT1011 microcontroller, but also the popular ESP32 module. Coming in a black PCB color, the board trades in extra I/O pins for a hand-solderable QFP package, with the ESP32, complete with all RF components, connected in place of the display extension header on the RT1062 based board. Rather than using the ESP32 in its full glory, which I am sure the component itself would maybe have preferred, it is being used as a WiFi Co-processor, providing WiFi connectivity features to the board while leaving the more powerful RT1011 to focus on running the Circuitpython stack and other burdens laid on it.

Both boards contain pretty tightly packed features but a summary of highlight features, common to both boards, include:

While the boards are still under development, following the twitter thread shows that he has overcome some of the major challenges with the boards and should be rounding them up very soon. The thread also shows several ingenious approaches as for instance, both boards Leverage on the recent inclusion of RT MCU series support in tinyUSB to provide REPL access over UART.

Arturo has created some amazing boards like the SAM D21 based board called “Serpentine” in the past and based on his track records, we should be seeing these boards on his Tindie page very soon.