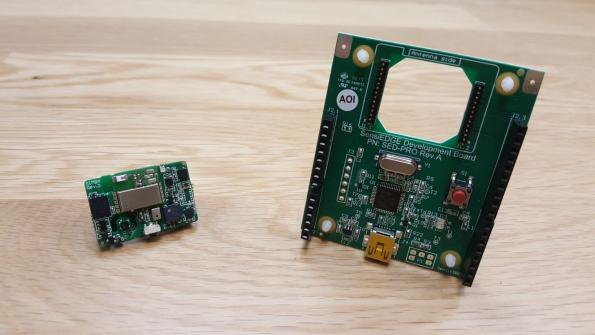 IoT which translates to the Internet of Things has been a significant buzz for the last five years while disrupting major Industries (from Agriculture, Energy, Healthy, Sports and several others).

IoT adoption has seen rapid development in the makers’ world, with different makers and manufacturers producing various forms of boards, chips, software to facilitate quick IoT development. Boards like ESP8266 from Espressif System is used for rapid prototyping and a low-cost choice for Wi-Fi-based IoT applications. Israeli based IoT firm SensiEdge has launched the SensiBLEDuino, an off-the-shelf, hardware-ready development kit based on the open-source Arduino for rapid prototyping of IoT applications.

SensiBLE is a full fledge customizable solution for those wanting to design IoT products. It helps to fasten development with a variety of sensors onboard, along with Bluetooth LE 4.1 capabilities and a low-power ARM® 32-bit Cortex®-M4 CPU with FPU. Some of the main challenges when embarking on IoT product development are; what platform will I use? What sensors are available to achieve my goal(s)? How do I handle connectivity? What about the Cloud Platform to use, and so on. Developers or product designer always result in the use of several boards or modules to achieve this while also increasing the time to bring the product to life. The SensiBLE kit removes most of these fears; it combines hardware and software in tiny form factor to allow developers get their product to market quickly at lower development costs.

SensiBLEduino allows developers to combine the popular Arduino programming language and the IDE (Arduino IDE) with the SensiBLE development kit SIMBA-DKL and STM32duino ‘Function Pack’, to design a proof of concept allowing for continuity through to final product and even beyond. The SensiBLE kit comes in two major release – The SensiBLE v1.0, a 20 x 30 mm form factor with coin cell battery and the SensiBLE v2.0 with more prolonged and thinner 17 x 40 PCB, additional sensors and a rechargeable battery.

At the earth of the SensiBLE v1.0 is the low power ARM® 32-bit Cortex®-M4 CPU with FPU and a certified Bluetooth® 4.1 low energy master/slave network processor module. In addition to its small form factor measuring at 20 x 30mm, it comes preloaded with many sensors and provides support for interfaces like SPI, I2C, UART, ADC, CAN, USB and several GPIO for extra functionality. It includes the LSM6DS3 3-axis accelerometer and 3-axis digital gyroscope, one LIS3MDL 3-axis magnetometer, a combined HTS221TR humidity and temperature sensor, an LPS25H MEMS pressure sensor and a powerful APDS-9250 digital sensor for detecting RGB, IR, ambient light and color detection. It comes with an onboard microphone for Audio based applications, a buzzer for sound output, a dual red and green led, a push button and a 4-Mbit SPI Flash for data logging. Along with a coin cell battery, the SensiBLE v1.0 is a robust IoT development platform.

The SensiBLE v2.0 is based on a more powerful system-on-chip (SOC) running a 32MHz 32-bit ARM® Cortex®-M0 CPU, and Certified Bluetooth low energy (BLE) v4.2. As compared to the SensiBLE v1.0 that comes with a coin cell battery, the v2.0 gets equipped with a 100mA Rechargeable battery via the power adaptor. The SensiBLE 2.0 includes all the available sensors on the SensiBLE 1.0 with an added UV (ultra-violet) sensor; unfortunately, the SensiBLE 2.0 doesn’t support the SensiBLEduino platform off the shelf.

The SensiBLEduino development kit allows the SensiBLE cloud module (SensiBLE v1.0) to be programmed using the Arduino platform by plugging the SensiBLE module on it and even supports attachment of other Arduino shields. The SensiBLEduino is cloud-ready and comes pre-programmed with a demo firmware to visualize the data performance of sensors using the ST BLUEMS App and cloud services. Including IBM Watson, Microsoft Azure, and Amazon AWS, while still providing support for standard MQTT protocol, thus giving the ability to connect to most cloud platform you can think off. Whether you want to integrate it with a new cloud service or your existing cloud platform, SensiBLEduino should do the job quite well.

According to SensiEdge, SensiBLEduino can boost any IoT project thanks to its tiny form factor that delivers out-of-the-box cloud connectivity and rapid tool for launching your next generation IoT applications all coming for less than $70. It’s reported that over 5,000 customers are already leveraging the SensiBLE cloud module or the SensiBLEduino development kit as their System of Module of choice.

More information about the SensiBLE platform and development can be found here.