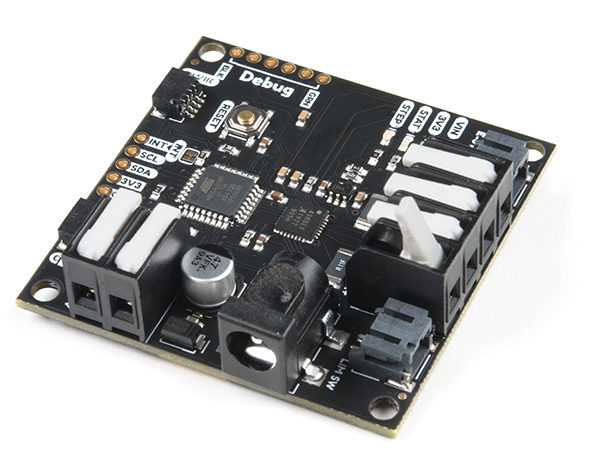 SparkFun has announced another experimental SparkX board design, which enables higher motor control on a Qwiic-compatible I2C bus, with support for a built-in emergency stop button, and the capability to drive motors requiring up to 2A.

The Qwiic Step is the latest of SparkFun’s entry in the SparkX board family, which are ranges of experimental designs marketed as fully-operational devices, but without guaranteeing them being manufactured regularly in the company’s range, following the release of the Qwiic GPIO add-on board and BlackBoard C Arduino-compatible development board. The Qwiic Step is designed to enable additional functionality to a microcontroller’s I2C bus, which offers Simple control of stepper motors. 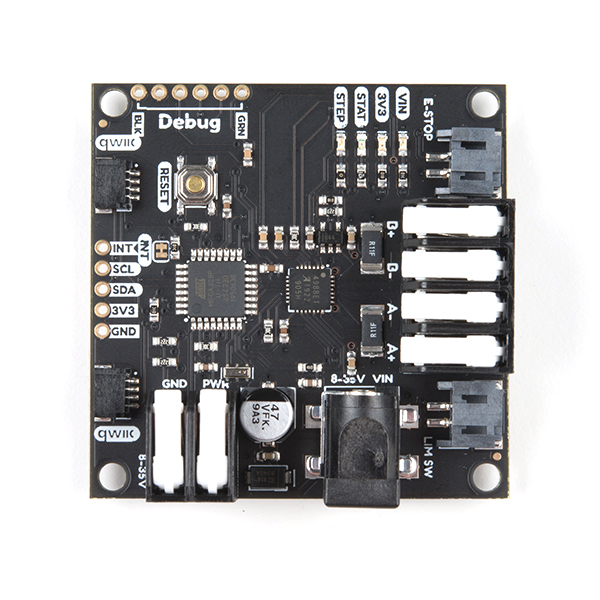 The company gives explanations behind the idea of the board:

“Ever found controlling stepper motors confusing? There are a huge variety of wires to get connected right: power, motor coils, and control lines. And the tiny screwdriver to adjust the terminals is never where it should be. Qwiic Step simplifies the tangle. Just connect your motor to Qwiic Step using the ergonomic latch terminals, apply 8 – 35V to the barrel jack, and plug in Qwiic Step to your favourite RedBoard with a Qwiic cable.”

“Qwiic Step comes preprogrammed to accept simple I2C commands, handling all the complex stepper motor calculations and control. This firmware leverages the AccelStepper library to fine tune each step of the motor. The speed, acceleration, position, and micro-step mode can be configured by the user. Additionally, the hold and run voltage of the motor is adjustable. This allows the user to specify maximum hold and run currents.” 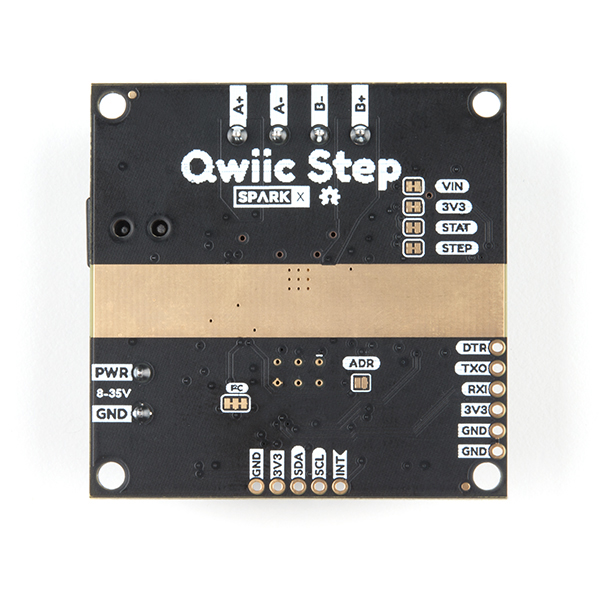 Qwiic Step supports open-drain bussed limit switches and the addition and configuration of an emergency EStop button. A variety of interrupts are available including when the motor has reached its destination, limit switch activation, and EStop activation. Qwiic Step can also operate a motor headlessly: a certain motor position or speed can be programmed and Qwiic Step will ‘run’ the command automatically at power-up. This makes a variety of simple movements achievable without the need for a master controller.

The Qwiic Step is based on the A4988 stepper motor driver, which is capable of running motors up to 2A with power supplied via barrel-jack or a latching two-pin terminal. Heat is dispersed through a large ground plane, with the option to add heatsinks. The heatsink is not supplied, but available on order. The board offers a range of interrupt options, and can run entirely standalone: Once programmed, the Qwiic Step can replay commands automatically at power-on.

The SparkX Qwiic Step is available now for $34.95. More information can be found on the SparkFun store.